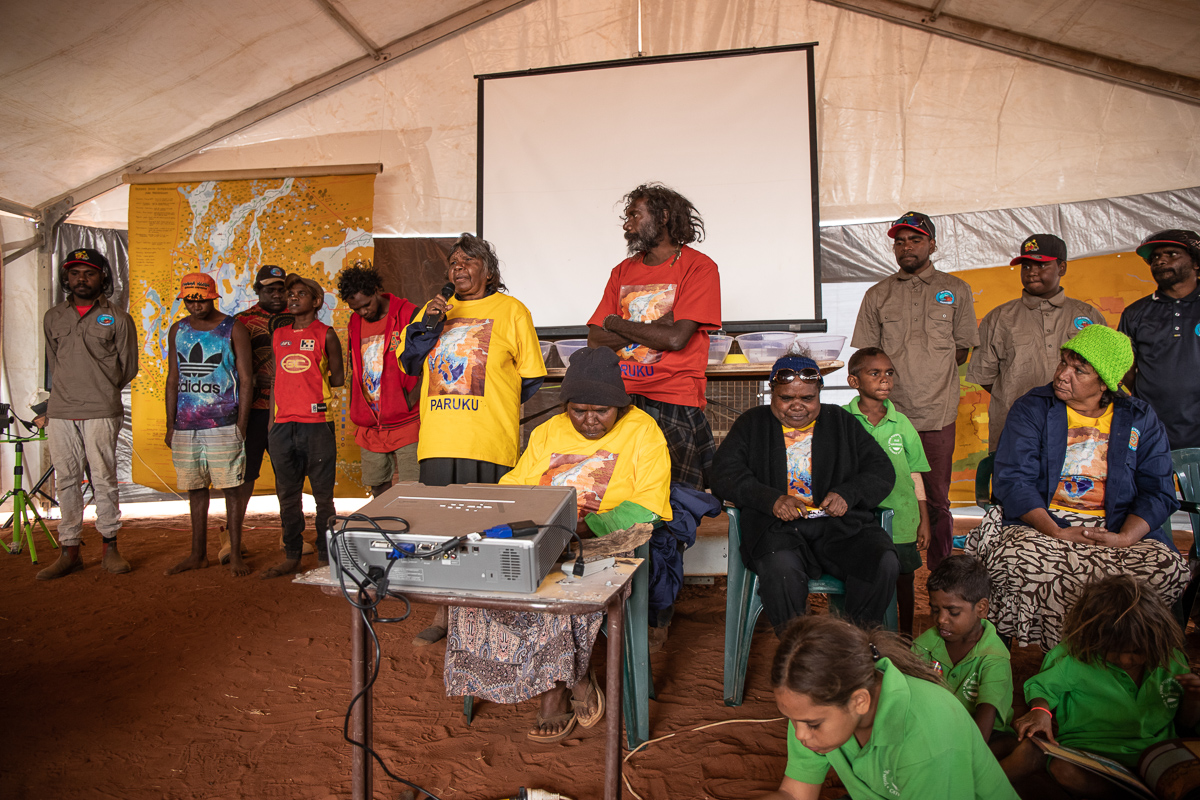 The Kumirrki women rangers have previously worked on country, but during the 2018-19 financial year, the ranger team soared to new heights with the help of the Paruku rangers, 10 Deserts Project funding as well as support from Kimberley Land Council (KLC), World Wildlife Fund (WWF) and the Indigenous Desert Alliance (IDA).

The Kumirrki rangers have had great support from the Paruku Indigenous Protected Area (IPA) coordinator, Desert Support Services (DSS) , WWF, and their ‘brother’ team- the Paruku rangers.  The Paruku rangers have mentored the Kumirrki team in order to develop and refine their skills and knowledge relating to biodiversity (in particular, examining satellite imagery, and sensor camera and bio-acoustic device management), and simultaneously, the women have assisted their ‘brother’ team to achieve broader threatened species outcomes for the IPA.

The women worked in collaboration with Ngurra Kayanta Women, Ngururrpa and DSS, to discuss and plan on-going Traditional Owner support for biodiversity studies. Ngurrara and Tjurabalan traditional owners (TOs) and rangers have agreed to work together (including Ngurra Kayanta and Ngururrpa) in the execution of fire operations, with the KLC fire planning coordinator. Rangers also held planning meetings relating to potential exchange programs with Ngurrura rangers during the 2019-20 financial year.

A major highlight for the Kumirrki rangers was their success hosting Species of the Desert Festival.  In close collaboration with IDA, Kim Mahood and the Paruku rangers, the Kumirrki rangers and TOs worked with numerous other relevant stakeholders in order to facilitate the festival held in Mulan, in June 2019.

The Kumirrki rangers and TOs did a fantastic job showcasing the IPA at the festival, by facilitating numerous field trips for over 200 other rangers (from other desert areas throughout Australia), and for 200 other guests and support staff, including politicians and other land management professionals (including ecologists, university representatives, school children, night parrot working group members, and pastoralists).  This prompted valuable discussions and planning opportunities with those relevant stakeholders for future land management works within the IPA.

Senator Louise Pratt visited the Kumirrki rangers in May 2019, and held discussions with the women about festival planning.

Kumirrki  rangers developed further cultural mapping, assisted by Kim Mahood (in the lead-up to the Species of the Desert Festival).  Rangers show-cased their maps at the festival, and also assisted other ranger groups to start on maps for their own country.  Kumirrki rangers, TOs and elders also collected, harvested and show-cased their local bush medicines to guests at the festival.

The Kumirrki rangers have worked closely with local pastoralists to ensure that new pastoral fence lines meet TO standards with regards to design/layout in relation to culturally significant sites.  The rangers have also designed and installed interpretive signage and ‘restricted access’ signs for important cultural sites throughout the IPA.